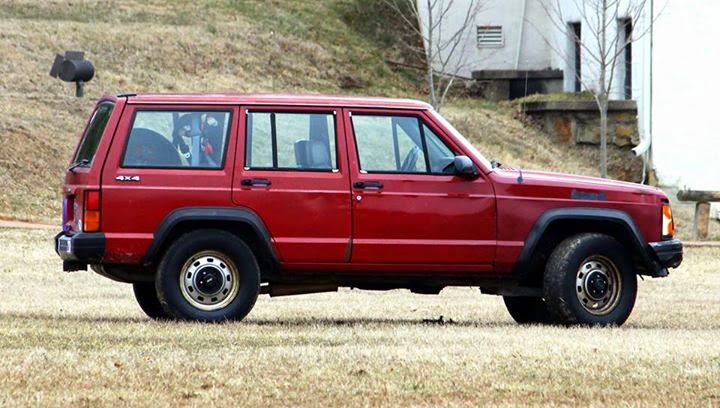 Sometimes, a physical object can have a deeper meaning that is made all the more important by its shared history. The red jeep pictured above belonged to Caleb, a friend of mine who graduated with me. It was eccentric in character to say the least, and upon graduation, he passed it along to the next rugby captain who would take over from him.

(One memory comes to mind regarding this jeep for me. It was fall break of my sophomore year, and I was on campus along with a few friends. I offered to make dinner for a few of them, and I remember the owner of the jeep at the time (Caleb) coming over with another friend of ours, Jill. We had a great time, and managed to avoid burning down the dorm while we took control of the kitchen. As Caleb and Jill were leaving, I remember the jeep (which seemed to have a personality of its own) had trouble starting. As it finally started off, I stood on the roadside visibly amused, and half expecting them to break down a few metres ahead. They didn't).

I got in touch with him, its previous owner, and the person he passed it down to, to ask what exactly this jeep represented. I'll let their words do the talking!

Previous owner:
Well, the jeep was my first car, and painted with my favorite color and from a good friend. Because I got it in Sewanee, it fit right in to our tradition of community. This signified strength and responsibility for me. As mentioned earlier, it was my first car so I had to maintain it with much love and care. I also drove the car to DC 3 times and it still drove anew as if some Angel was working under the hood; a Sewanee angel perhaps.

Second owner:
I actually had my eye on that Jeep long before I knew Bexter was selling the thing. I used to see him (Bexter) cruising around campus in that noisy piece of awesome and I hoped to find a car like that someday for myself. There was something so unapologetically intense about the thing. Its presence was undeniable, albiet intrusive, and yet it emanated this overarching aura of strength and this sort of rugged friendliness.
When Bexter reached out to me about buying it I knew it was meant to be. I had always looked up to Bexter. He sort of took me under his wing my freshmen year and helped me assimilate to the "Sewanee Lifestyle". As a fellow African transplanted in the American South, he knew much of the culture-shock I was going through those first few semesters and he made everything seem alright. He is such a passionate person and you can really see this come out when he sings. I've never really told him this but I always knew something of his passionate soul found its way into that car, you could feel it.
Anyway, he sold it to me for a ridiculous price. Hell, he practically gave her to me. It was my first car. I was so stoked. I didn't even have an American license yet. My good friend Sam Dexter had to drive me down to the DMV to help me figure out how to pass the driver's test and get registered. So my first ride in the car was actually in the shotgun seat and you had to climb in through the window because the door was jammed.
After we got all the paperwork sorted out I began to drive that thing around like mad. It felt so damn good. I took it on a few road trips, got a few speeding tickets, and jam packed the thing with rugby players and did donuts in the gravel. I've always believed that anything worth doing is worth overdoing. In regards to the Jeep, that meant driving the hell out of her and taking meticulously good care of her at the same time. I made a point to get to know every corner of that greasy engine, it was a beautiful thing.
I quickly learned that the car was at its best when shared with as many people as possible. I honestly think the thing would work better when more people were riding in it, and to my knowledge, that is still the case today. She is so loud that you sort of have to yell at each other when you drive around. But I think it's good to raise your voice every now and then, it lets something out of you, something that needs to be let out.
That Jeep was so unprecedented, so disruptive, and yet so charming. Lodged in a community of primarily upperclass southerners, the Jeep had the effect of being like that eccentric aunt in the family who everyone is slightly embarrassed about but who still gets to show up for thanksgiving dinner because she's family dammit. She's so brash, so entitled, so unpredictable, and yet the happiest in the bunch, or at least the only one with nothing to lose. That is what this Jeep was. That is what it felt like to drive it.
It was an honor to drive that thing around for about 3.5 years. I'm grateful to Bexter and Lawrence for taking such good care of it before passing it along to me. I've always been uncomfortable with referring to it as "my jeep." I think there is an unfortunate impulse in human nature (or at least in my human nature) to want to 'possess' good things. But not all good things are meant to be possessed. And when these good things grace you with their presence and come into your life, it's always a good idea to never hold on too tight. That Jeep really belongs to no one. It's a symbol that embodies values of freedom, brotherhood, creativity, true love, and the irrational yet exquisite capacity to fight on and on and on. Everyone has a right to these things, and there is something about the Jeep that extends the invitation to partake in these things, these values, and nothing about that is exclusive!
How could I ever sell such a thing! Never, no, it would be disrespectful to her and an insult to her freedom. Instead I passed my duty as primary caretaker on to one of the greatest men I know. A man I trust and love and look up to. A man who has taught me a great deal about life and rugby and the nuances of flip-cup. I know the Jeep will serve him well and I know he will serve the Jeep well. The Sewanee rugby family will surround and protect that Jeep for years to come and something about that really puts my hear to rest.
I always wonder if perhaps the Jeep will die someday. Part of me thinks that it could only die if people stopped believing in what she represents. If that day ever comes however, I pray God gives us the grace to let the Jeep go with full hearts and peaceful souls...but until then, until its final mile, we will fight for her, and she will surely fight for us.
-C.B.S.

Current owner:
The jeep for me is not as much about tradition as it is about shared memories. It's a place to get to know someone and a place to feel young and invincible. My freshman year I lived in courts with Caleb and drove with him in that jeep to rugby practice every day. He was the first guy I got to know on the rugby team because of these drives. I remember sitting in the back seat (the front door was permanently sealed) on the way to practice, exploring all the paintings and scrawled quotes on the interior and talking to Caleb about where we came from and how beautiful rugby is. Then we'd pull up to the old EMS house and Sam Dex would run out and climb through the front passenger window and we'd be off to practice.

I remember how much I looked up to Caleb and how he drove the jeep with a reckless abandon, while telling me about all its finicky little personality traits like how it runs better in the cold and when you drive it hard. Last year I remember sitting in the back seat in the Fiji parking lot one afternoon with a new rugby freshman for a full hour just talking about rugby and our lives and bonding. During our conversation we finger painted "HAZE" onto one side's seat with extra field lining paint found in the back seat.

The jeep is all about inner beauty, resilience and tlc. It will run as long as it has someone to share itself with. I can't think of it as anything but Caleb's truck but it is the rugby club's truck now and I know it loves its job. It'll never leave the mountain.

Posted by The Kenyan Nomad at 7:00 PM