Wealth; why does it disturb us?

The world has a history of 'hating' on the rich. From Robin Hood to modern day news articles, the rich are viewed (unfairly) negatively.
Recently, the Nation featured an article about a helicopter that was forced to make an emergency landing in a farm in central Kenya due to bad weather, as the pilot was taking his children to school. After that, there was some debate that went on, and a rather opinionated article followed, that noted that when most people cannot afford to take their children to school in cars, we have someone who takes his to school in a chopper everyday. The author sounded rather disgruntled, and I felt that they thought that this pilot (Alan Root) should not taking his kids to school like this.
I ask, why not?
If someone has wealth, in most cases this means it has been earned. Whether through generations, or from rags to riches, someone has worked hard for this money, and once they have it, why should they not use it as they see fit? Sure, we do have cases where rich people have been made rich not due to their hard work and honesty, but because of the corruption which is rampant here and elsewhere- but it is not fair to judge and punish all the wealthy based on these select few.
Money is not the social evil we all believe it to be. It only becomes this when we choose to portray and use it as such.
Instead of begrudging someone their right to spend their hard-earned money, why don't we congratulate them and wish them well? What goes around comes around folks...
Have a well-earned week ahead!
Posted by The Kenyan Nomad at 3:26 PM 1 comment:

For all the time wasting I do on Facebook, links like these do make the time worth it!

http://www.buzzfeed.com/expresident/pictures-that-will-restore-your-faith-in-humanity
Posted by The Kenyan Nomad at 6:46 PM No comments: 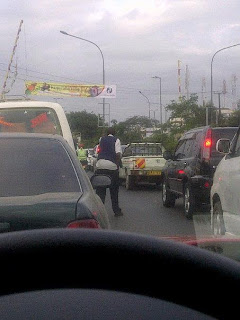 Photo taken by Yeisha Hirani, 2012
Posted by The Kenyan Nomad at 5:50 PM No comments:

While I'm loving my work, there's one thing I can honestly say that I hate; the traffic that I have to sit through everyday!
For a distance of thirty kilometres or less, I can sometimes take up to two hours to get there.
However, I decided to do what I like to do in such situations; make the best of things. I opened my eyes and realised just how much goes on around my little car that I was previously oblivious to.
Yesterday for example, on Uhuru Highway, I was alongside a van that had www.privatesafaris.co.ke proudly printed on it, and was full of a group of tourists who could not have been more obvious if they tried. Reason? At least three of them kept whipping out cameras as soon as something out of the ordinary happened (which is pretty often mind you), such as matatus driving off the road, and people doing the "Kenyan run" across a busy road not too far from a zebra crossing (crosswalk).
After this chuckle-inspiration, I turned my attention to the left to a 22 wheeler whose truck was emitting noises that made me think a metal eating monster lay in its belly. Of course, the truck's age probably had something to do with it...
It wasn't just the amusing instances that caught my eye, but the sheer number of people on the road. It made me think, just how often do such a large number of people collect anywhere else apart from on the roads? And in spite of all of us suffering through this together, we are all so obviously wrapped up in our own lives, in a little (or big depending on what you're driving) cocoon of steel and glass. Does anyone realise the power of all these people who spend these one or two hours together? I wonder what the reaction would be if I were to roll down my window and strike up a conversation with the person in the car next to me. Ideally, people would catch on and do the same. We would be a community, united, even if just for a short while. Realistically, someone would probably make a snatch for my bag or phone, or in less dire circumstances, recommend me to the nearest mental asylum.
Let's wake up Kenya, to the enormous potential and power that lies within us!
Posted by The Kenyan Nomad at 1:57 PM 2 comments:

Things have been quiet on my end for a while! Between falling sick, having a wedding in the family, and going off to some meeting or the other, things have been pretty crazy.
Ashamedly, I haven't been to visit the homes since the last time, and so don't have any pictures to show.
Some good news though; the evaluation was finally completed, and the first young adult just breezed out of the room having finished it!
The meetings with potential partners are going well too; people seem interested in what BTCKE has to offer, and are being very helpful (much to my relief)!
I'll keep you posted; thanks again for supporting Be the Change- Kenya!
Posted by The Kenyan Nomad at 12:49 PM No comments: