First of all, if my recent restaurant experiences have taught me anything, it's that I need to start carrying my DSLR around more. In other words, apologies for the pictures- they really could've been better!

News Cafe is a South African chain that recently opened franchises in Nairobi- the Sarit Centre branch opened in December, 2015. I've passed it a few times- once even went and grabbed a table, but wasn't really feeling the menu that day.

Last Thursday was dismally hot. Picture the kind of day where the heat is actually physically exhausting. Plus, since a four day weekend was coming up, I think the air of impatience around us didn't do much to help! I was planning to run a few errands after I left my client's office, so thought that grabbing lunch on the way was a good idea; I knew there was no way I'd want to leave the (relative) coolness of my house if I went there first.

My cousin was headed in the same direction, so he suggested that we go to News Cafe. Perfect! I'd been wanting to do a restaurant review (any restaurant would've done, really), and I'd also been meaning to visit for a bit. Two birds, one stone and all that. 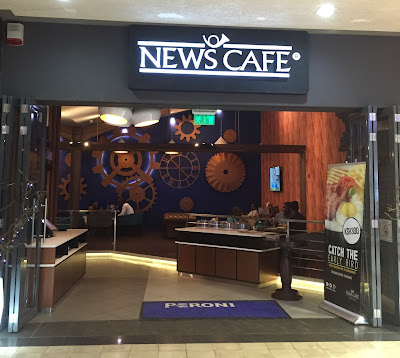 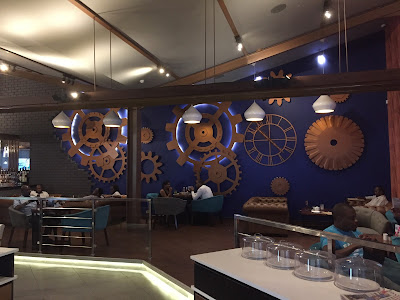 The ambiance inside News Cafe is pretty cool- I could definitely see myself coming here to write or for drinks. They have outside seating too- this one's a little packed, and not as picturesque, but that may just be because of the view in Westlands. Thankfully, it's covered.

It was 1:40 on a Thursday afternoon when we walked in, and being the day before a long weekend, it was naturally quite busy. Luckily, we got a table quickly enough- and this time I was definitely thankful for a corner table. The heat makes me much less inclined to want to be surrounded by other people's mindless chatter.

As I perused the menu after ordering drinks (a mango juice for me, please- see complaints about heat above), I was confused between ordering the creamy prego (chicken), or the fish and chips. I FINALLY came to a decision, and asked for the chicken, and my cousin asked for one of the chicken wraps. Imagine our surprise when we were told that the restaurant had run out of chicken! How exactly does such a busy place not prepare for something like that?

Anyway, my decision was effectively made for me. I got the beer battered fish and chips, while my cousin opted for the chilli beef and bacon wrap.

Because of my poor menu picture, I'm adding two screenshots I took of their menu from their South African website- the menu is more or less the same. 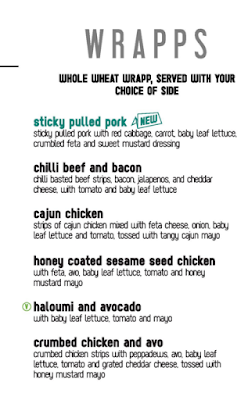 The food came quickly enough, although our waitress did make a little bit of a rookie mistake- she gave us the hot towels to wipe our hands AFTER she served us the food.


The food was well presented, although I was a little confused by the random greens thrown on top. Presentation, I guess? I personally thought the food looked great without them.

The fish was really good. Crispy, and the batter was delicious. Fish and chips can be a hit or miss, so I'm glad that my expectations were exceeded. The flavour wasn't overly fishy, which some of you might agree can be quite a turnoff. The chips were great too- a little on the smaller side, but crispier that way, and the tartar sauce was the perfect accompaniment. Would I go back for this? Yes, definitely. My cousin liked his wrap too. The only complaint he had was when he asked for ice for his sparkling water, and the waitress completely forgot about it.

The portions were generous, the service friendly, and the pricing well worth it. I'll probably do a repeat visit one of these days, and maybe try out the drinks this time!

Does it say what kind of fish is it? Lake fish or Sea fish?
Chips look more like fries to me.
Looks spacious but cannot quite relate the name News Cafe - to food.
Will try when I visit Nairobi.
Karam

Can't believe they ran out of chicken lol. I went there this past Thursday and absolutely loved it! Unfortunately it was a work dinner so I couldn't snap pictures of anything, but I have to go back to do a review of my own. The food was soooo good, and the chicken is definitely worth going back for 😊

I believe it was Hake, Karam! Not quite sure whether lake or sea, unfortunately.

Glad you had a good time Crystal, what did you order?