After some reflection, I came up with a definition of leadership. Of course, I feel that a leader is different based on the different situations that they face, so this was a broad definition. What do you guys think?


A great leader is someone who, in addition to enabling others to find purpose when faced with uncertainties, also embodies certain qualities. First of all, they know how to work well in their teams. They recognise and respect talents and work of all team members, and are able to effectively deal with the breaking of norms without offending or alienating any one teammate. A good leader is self-confident, motivated, and works hard to develop the team as a whole.
They have vision and do their work because they believe in it, not because they have to. They are able to plan well, and inspire and energise others in their team to commit. A good leader accepts responsibility for the team’s failures as well as successes, and views these as learning opportunities.
Finally, a good leader is one who is not afraid to be unconventional in order to bring about change.
Posted by The Kenyan Nomad at 1:25 PM No comments: 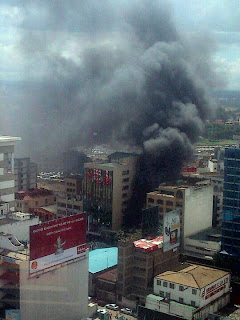 Prayers go out to all those affected by the blast on Moi Avenue not more than two hours ago. I look forward to a Kenya where such things don't happen anymore. While it may be hard to fully understand the implications of something like this right now, my heart goes out to all the people on site right now in the middle of all the chaos. May God give us all the strength to emerge from this as a country.
The BBC article is given below for those who want to take a look.
http://www.bbc.co.uk/news/world-africa-18232621
Posted by The Kenyan Nomad at 2:37 PM No comments:

IshouldgetbacktoworkbutI’mreallythinkingabouttheMarsbarwaitingformeoutsidehowwonderfulchocolateisohlookarandomwireonmydeskIwonderwhatitisohyayanauxiliarycablethatmeansIcangooutandplaysomeofmyownmusicinthecarwaitit’srainingoutsidecan’tgoforadriveheyI’mstillinmyPJ’sIlovelazyFridaysandsolookforwardtoseeingmyfriendstomorrowmaybeI’llcatchamovielaterontonightIshouldrewardmyproductivitywonderwhatthedogsareuptoIlovethewaythemindworksspeakingofmusicwhateverhappenedtothatCDohlookthereitislet’stakealistentoitlatertodaymaybegeteveryoneelsetolistentoowhatisfamilyforifnottoimposemymusicontherainjustincreasedexponentiallythisdefinitelymeanstrafficsgoingtogetmuchmuchworsesighifonlypeopledidn’tdrivelikematatuswellthatMarsbardefinitelybeckonsnowthinkingstops.
Posted by The Kenyan Nomad at 4:17 PM No comments:

Justice for a special dog

http://www.causes.com/causes/645034-justice-for-a-special-dog
I can't believe someone would do this to a dog for fun... putting a firecracker into his mouth and then making sure he couldn't open it. Vucko, the German shepherd that this happened to in Bosnia, apparently wandered around in agony for 5 days unable to eat, before he was picked up and taken to a vet. Unable to have reconstructive surgery done, he had to be euthanised.I even can't begin to express how angry this made me. What is the world coming to?!
Read more about the story here:

http://www.care2.com/causes/vucko-the-dog-face-blown-off-with-firecracker.html
We may not be able to help the poor dog now, but let's spread the message so that something like this does not happen to an innocent animal again!

Posted by The Kenyan Nomad at 2:48 PM No comments:

It's been a pretty eventful week, last week seems like so long ago! I'll put some pictures up from work soon; silly me left my camera on, and the battery drained out so I wasn't able to take as many as I had planned.
On Monday I headed into town (which in Nairobi is an actual area, not just a general reference to leaving the house to go someplace) to meet my supervisor and some of the other people I'll be working with. Having inherited my father's sense of timing, I arrived half an hour before the meeting, so sat there for a while and whiled my time away. The meeting went well and I got a feel of what my week would look like. Two days a week I work in the office with the Young Adult (YA) stuff, and then two days I work from home and in town (the general definition this time), with meeting people, brainstorming, recruiting, planning and executing events. The rest of the time I use for planning and reflecting on my own time, and some days I'll attend weekend events.
So the next day, I headed to Ongata Rongai, and finally got to the office after being stuck in about two hours of traffic. I spent the day looking at the biographies of the Young Adults, as well as getting briefed on more of BTCKE's work. Wednesday I worked from home, planning the leadership evaluations and learning more about the YAs. One of the questions that obviously arose is, what defines a leader? The Ganz definition is someone who takes responsibility for enabling others to achieve purpose in the face of uncertainty. The definition of leadership however, may change depending on the role one is thrust into. How would you define a leader?
Today was interesting because I actually got to visit one of the homes that BTCKE partners with, called 'Nyumba ya Tumaini' (http://bethechangekenya.wordpress.com/2012/03/16/meet-nyumba-ya-tumaini-2012-partner/). Most of the kids were at school, but I got to meet two of the newest children, Peter and Charles, who were shy but not wary, and were able to tell me what they were doing and what sports they enjoyed. They were excited to see the pictures I took of them (to be put up soon!!) too! Since they were new additions to the home, they weren't at school because they still had some stuff to sort out, such as uniforms, new shoes, getting desks at the classroom (a problem that I hadn't exactly expected!)
Leaving the home, Sarah (one of the two directors of BTCKE) and I got stuck in the mud, and had to wait a while to be pushed out, but all in all it was a fun day, and we had some interesting conversations on the drive back and at lunch (which was at a cafe that had no fries or ice- interesting experience but worth it).
Right now I'm sitting at my sister's office at Inuka Kenya Trust (a nonprofit too, http://www.nisisikenya.com/), and we'll head home to some much deserved chai (Swahili for tea) soon!
Much love from this corner of the world,
R
Posted by The Kenyan Nomad at 4:12 PM No comments:

Be the Change- Kenya Intro

I got an intern introduction! Check it out here: http://bethechangekenya.wordpress.com/2012/05/23/meet-roshni-btckes-new-program-intern/
Posted by The Kenyan Nomad at 3:35 PM No comments:

I'd been meaning to put this up for a while!
Photography project

Posted by The Kenyan Nomad at 12:38 PM No comments:

Be the change you want to see in the world

This summer, I'm interning at a great new nonprofit organisation called Be the Change- Kenya (BTCKE). This attempts to empower local people to best be able to help run local organisations and to reduce dependency on international aid. Right now, Be the Change is working to help eradicate child poverty in Kenya. They train directors of children's homes, and partner with various young adults who work with these homes. These young adults are also trained in various skills such as leadership.
While I'm here, I will be working on two things primarily; I will be meeting with and evaluating the young adults that BTCKE works with, and I will be helping to increase the development work that BTCKE undertakes by recruiting local partners, and helping to spread the word.
This summer, let's do something to help! More information can be found at their website below:
http://www.bethechangekenya.org/BTCKE/BTCKE.html
If anyone is interested at all in helping, please do not hesitate to get in touch! Many Nairobians who work in fields such as management consultancy and the like have volunteered to coach these  young adults and directors. If not this, then we are looking for people to host small awareness events, and donors too!
It's time to step forward and facilitate change ourselves; waiting for someone else to take initiative will not get us anywhere!
Looking forward to being the change,
Roshni Walia
Posted by The Kenyan Nomad at 11:35 AM No comments: