Amandla Ooko-Ombaka. Where do I start? Those who know her know that she’s a force of nature, a whirlwind of energy and inspiration, and an amazing colleague. I love being surrounded by amazing women at work who’re intelligent and hardworking, and Amandla is certainly one of those. Is it any wonder that I decided an interview with her HAD to be done? Amandla, to me, truly embodies the values of resilience, persistence, and hard-work. After reading this, I hope you’ll see why! 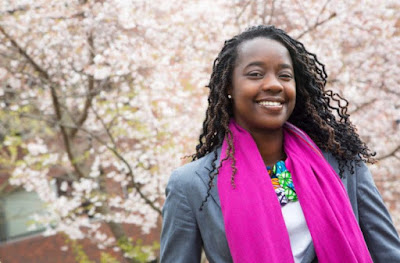 When speaking about her family and growing up, Amandla uses the words ‘full of laughter, travel, SO MANY COUSINS (40 first cousins!), and lots of activities’.

The laughter and travel she attributes to her dad, who was the ‘most serious jester’. Growing up a daddy’s girl, she witnessed his seriousness at work, as an MP in Kenya’s first multiparty election in the nineties – she’d drive upcountry with him quite often while he was campaigning.

By day, however, he was a lawyer willing to take on the ruling party of the day. Case in point? He represented Nobel Laureate Wangari Maathai in her landmark case against Kenya Times Media Trust, and the Ominde clan in the Ouko murder trial. He faced a number of attempts on his life in his line of work, upto and including his final big project – co-leading the team that wrote the current Kenyan constitution. However, to his credit, he managed to prevent these stresses from invading his home environment, coming home, throwing his kids on his back and belting out an old school Luo rhyme about a donkey reaching Yala, tickling them till they cried.

The cousins and activities she attribute to her mum who ‘didn’t play’ – according to her, family and excellence (including applying yourself fully to everything you tried) were non-negotiable. Amandla remembers many a Saturday afternoon at her grandma’s house playing around with her cousins – but only after cleaning the house in the morning, hopping on a matatu to town for her dance classes, and finishing her math homework!

For the first few years of their childhoods (Amandla has a younger sister and brother), their mum was the head of the OBGYN department at Kenyatta National Hospital. If Amandla wanted to go to dance class while mum was at work – well, she found her own way there. Her mum was very clear, she and her husband had a driver, Amandla did not 😉

Her parents were very supportive. There were no expectations of their kids having to follow in their professional footsteps. Amandla dropped Biology after standard 8 – so that ruled out medicine. She fell in love with Physics and Mathematics in high school – so that ruled out law. However, she’s clear on the fact that she still wants to run for office one day like her dad (and those of us who know her know she’d be great at it!) – she remembers writing an essay in standard 2 saying that she wanted to be the President of Kenya. True to their expectations, her parents would often remind her of this audacious (or so she says…) dream by asking her what she was doing to prepare – that too, was a job!

Baby Amandla started off at Madari Kindergarten (I’m an alumna too!!), before becoming a proud Msongari girl then heading to Brookhouse for her O-levels. She left Kenya at 15 for boarding school in the UK to do IB. She’s always been a self-professed nerd – she latched onto Maths in high school, which turned into Economics and Mathematics at Yale University for her undergrad, which then led to Development Economics and an MBA at Harvard for grad school (note to young readers out there: Maths is good! And not something to be afraid of.).

Amandla describes her Yale experience as life-changing. Her dad passed away just before she started IB and her mum just before she applied to college. Many people told her she should move home after IB and reset her expectations – after all, college abroad was too expensive. She was terrified about the application process itself; her mum had read and edited every important essay she’d ever written so far – how was she going to apply without her? How was she going to even afford college? What about her two younger siblings? Their parents had always said that their education was the only thing that couldn’t be taken away from them – what sort of example would she be setting for her siblings if she compromised then?

And so, she didn’t. Going to college so far away from home provided a hard shot of realism for Amandla. It was the first time she truly struggled at school; her freshman year grades needed an academic intervention. She was grieving, and not dealing with it very well. On top of that, it was very clear that there was always someone more (...insert word here!) than her in her classes.

To compound issues, while she was on full academic financial aid, her room and board were taxed. She lived off Ramen noodles for weeks at a time and volunteered for all kinds of ‘free Psychology studies’ to make ends meet – in between her two on-campus jobs.

Amandla was looking for full-time employment when the 2008 financial crisis hit; all of a sudden, the jobs that she had been setting up for herself since freshman year that would pay her enough to help her siblings through college evaporated. Companies courting her to join investment banks couldn’t guarantee visas for her to stay after school.

At this point, Amandla leaned hard into the incredible support network of her college friends – a particular group of three other African women she met at Yale, who call themselves the ‘Council of Stateswomen’ – and applied for every single scholarship and fellowship opportunity available. She stayed in the computer lab for four days straight once because her laptop broke and she couldn’t afford to fix it before applications were due (it was much cheaper to fix in a town four hours away by bus – but she didn’t have the fare or the eight hours to spend not working on applications).

Luckily, everything worked out at the end. When looking back at 21-year old Amandla, she is incredibly proud of the strong and resourceful woman that Yale helped her become. She’s also extremely grateful for the eye-opening experiences it provided. As part of a Yale delegation, she was an election monitor for the 2007 Kenyan elections. They were in Kibera when Raila Odinga arrived with Fred Gumo and couldn’t find his name on the voters’ register… a rock hit the window above her head soon after this news spread – but she tells us that’s a story for another day. She knows many Kenyans smarter and harder working than her, who similarly lost their parents while quite young, but did not have access to the opportunities that Yale afforded her.

Currently, Amandla is an Engagement Manager at McKinsey’s Nairobi office, affiliated with the Agriculture and Food practices – a role she simultaneously describes as the ‘most exhilarating and stressful job’ she’s ever had. Her job is to hold the complex spiderweb of a project together, and make sure that her team delivers the best answer possible for some of the most complex problems faced by their clients.

This team includes the 3-4 analysts and associates she directly coaches and supervises, 2-3 partners who provide deep expertise, and countless other incredible McKinsey gurus in research, analytics, visual graphics, etc., that help deliver for clients.

Recent problems she’s worked on include 1) writing a national agriculture strategy for an African government and 2) helping a global food manufacturer figure out how to triple their revenues in Africa and further localise their business model.

Posted by The Kenyan Nomad at 9:15 AM

1 am particularly encouraged by the journey of Amanda.she exuded a Sence of resilience and
determination. What an inspiration.

I was a great admirer of the unique abilities of Prof Ooki Ooko Ombaka.

Great seeing His legacy lives on in you.