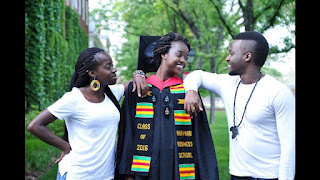 If you haven't yet checked out part 1 of this interview - find it here!

I’ve always been impressed by Amandla’s boundless energy – in the face of adversity when most of us would shy away, she boldly looks a problem in the face and says ‘try me’.

Amandla is a young Kenyan woman who describes herself as having ‘a public sector heart, a private sector mind, and a passion for getting things done.’ She is interested in spending her most productive years doing her part to help Kenya become the thriving democracy her father envisioned, and being a fierce and loyal supporter of all her friends who’re trying to change the world. If she were to choose three words to describe herself they would be: caring, hardworking AF, and persistent.

She also confesses that she has an unhealthy obsession with gummy bears, and her happy place is Watamu on the Kenyan coast – she just needs coconut water, a book, and the sound of the ocean waves to be at peace.

She believes that in life, she has to be her own biggest cheerleader and hype herself up – hence the boundless energy! If she won’t do it – who else will? As she puts it:

“There are too many enemies of progress in life for me to be in my own way. Also, more practically, if going to get out of bed at all (and some days I just stay in bed and phone in because I’m human), I better put my best high-heeled foot forward and SLAY.”


Among some of Amandla’s innumerable successes, two stand out. The first was her siblings’ graduation. She made them both promises that she would do her absolute best to make sure they had access to all the opportunities they would have had to complete their college educations had their parents been alive. Watching both of them graduate with honours (and as mini-celebrities) from school has easily been the proudest moment of her life!


The second happened more recently – the agriculture strategy she led has formally moved forward for implementation. Her team and her gave everything to the project, and the potential for it to impact millions of farmers and >25% of the GDP of the country is humbling. As she puts it, “it’s not a slam dunk yet because the proof is in implementation, but we’ve supported this process as far as we can without being in government. Maybe it’s a sign that I should be in government 🤣"

Amandla is a role model and inspiration to many, so it was only natural that I ask who hers have been! She listed a few who, as she put it, serve inspiration for breakfast:


Reflecting a bit on being a role model and the learnings that emerged, Amandla shared the following, and commented that living her life the best way she knows how can be an example to anyone at all is all the more reason to keep grabbing life by the horns:


The 4 most important principles Amandla believes a leader should live by:
The best advice Amandla’s ever been given is 1) Ask for forgiveness, not permission. Just do it if you can stand by your decision, and the rest will follow and 2) Have a voice, don’t be a brand.

Amandla plans everything to a T so she can orient herself in ‘this crazy thing called life’, but does mention that some of the most memorable and fun experiences of her life were unplanned (note to self!):


“Moving to Lagos for work when I was 23 without having visited West Africa before, the most magical and spontaneous 10 hr date I’ve ever been on with a very good looking man I dated for a while, randomly entering a dance competition on Saint Patrick’s day in Addis Ababa (even more random) and winning my favourite piece of art ever...”

Let’s just say Amandla got a sudden million dollars, hers to do with as she pleases, no questions asked. What would be the top 3 to 5 things she would prioritise and why?

If she was invited to give a TED talk, what would it be about? I’d take the TED-style talk I gave in grad school to the next level… “Yes, African: Breaking through mental barriers to Africa development”.

While no single narrative defines the continent, countries in Africa share similar barriers to reaching our visions of prosperity. I’ split these barriers into two broad categories – hardware and software. Hardware is as all the ‘technical’ stuff that we know how to address e.g., utilities. More than 60% of Sub-Saharan Africans lack access to electricity. The grossly simplified answer to this challenge is to build more power plants.

Software is a more nuanced concept. It is an attitude, a state of heart and mind. Software is the attitude that led Kenyan bankers to dream and launch M-Akiba, the world’s first e-Treasury bill that allows ordinary citizens to purchase government bonds directly from their mobile phones, imagine that…

You have to wait for the TED talk to get all the goodies, but I used the talk to lay out 3 ways to break through these “software” barriers…

What are the top 3 books she recommends to others?


Amandla believes her biggest source of strength comes from her belief in God – many events in her life could have had wildly different outcomes, and she believes that there definitely is a higher power looking out for her. She struggles with institutionalised religion a lot because of how it is so often corrupted by people to do pure evil (from her own experience in intolerant Christian Churches, Nadia Murad’s experience as a Yazidi with extremist Islam). But her current Pastor Pete Odera (see a snippet of an old interview she did with him here during one of her summer internships: https://vimeo.com/133440516) is teaching her to question and believe at the same time.

Also, it helps just knowing that most things in life are surmountable, as long as you’re alive. Amandla has an incredible family and group of friends who’ve lived through a lot together.

Does Amandla have any success rituals she swears by?
Getting really razor focused, and being honest with myself - if I really prepped for it (did all the studying, got in all my long runs while training for my marathon...), I trust that the practice will kick in. If I haven’t put in the work, I hope for luck but level set my expectations.

Depending on the time of day and how much time I have before the moment, I’ll go for a run, meditate, or blast Beyoncé’s Formation and Flawless on repeat.

If she could have a dinner party and invite any three people, dead or alive, who would they be?
Mom, Dad and my Aunt Barb who I hope are all really proud of the young adults that my siblings and I have become. It would be a dinner full of love, hugs and real talk

Posted by The Kenyan Nomad at 9:41 AM