What's a reunion without brunch?


Asking ourselves this, 8 of us planned to do brunch the Sunday most of my friends were in town - 17th of December. The Garden Brunch Cafe was selected as our location, and so we headed there at about 9:45 am. Unfortunately, the cafe doesn't take reservations, so there was about a 30 to 40 minute wait for us - more for those who came after us. The weird thing is that they don't seat tables of more than 6, and all had to be present for us to be seated. This meant that 4 of us got a table first - and then 2 of us had to wait an ADDITIONAL 30 minutes for the last 2 to arrive to be seated. We weren't too happy about that, but by the time we were hungry enough that we just wanted some food - a good decision, since the food was great! The ambience was chic and modern, and not too busy.


We decided to get a carafe of their mimosa for the table - mimosas make everything better, and you simply can't do brunch without them. Really silly, but I got excited about the fact that they spelt 'litre' with an 're' - you can see it in greater detail in the second picture. 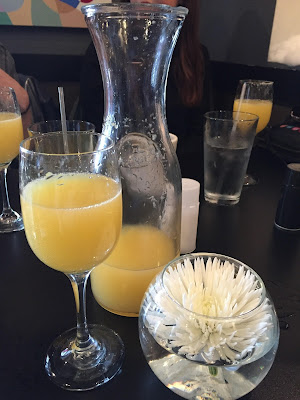 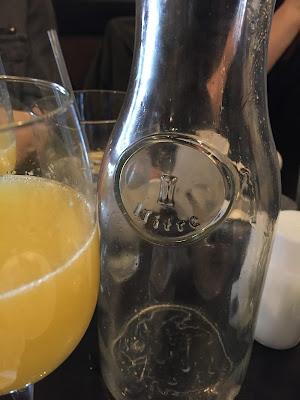 I decided to get the fiesta omelette, with turkey sausage, green peppers, cheddar, onions, and jalapeno peppers, and a side of pancakes to share. One of my friends ordered the same, and the others got the french toast, and the breakfast bowl - scrambled eggs with cheddar cheese, a choice of bacon, sausage or ham, served over pan roasted potatoes - with an iced coffee. 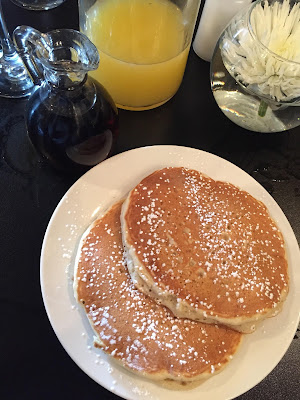 Oddly enough, there was no cutlery on the table, and we had to ask for it. In fact, the service for such a popular place was slow and substandard - hopefully, this was just a one time thing. For example, one of our friends ordered a southern pecan flavoured black coffee. This came, but we had to ask for the cream, which took a while to bring. The same friend had asked for her omelette without onions - however, it came with.

Okay, back to the food. My omelette came with toast and grits. The grits were FANTASTIC. They were perfectly creamy, and I had to pace myself in order to avoid finishing them all in one bite! The fluffy pancakes also got a 10/10 - they were perfectly fluffy, and just slightly gooey in the centre. I absolutely LOVED them. 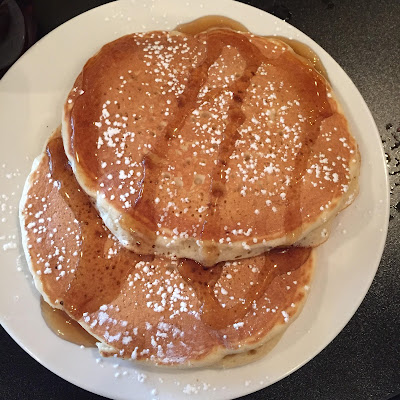 The omelette was good too - however, it wasn't closed, and the ingredients were cut really big! So this meant I had to take a bite of peppers separately, then sausage separately, and so on.

My friend who ordered the french toast really liked it, and rated it among her 'top 5 french toast experiences'. The only thing she would've improved was to have her eggs come with some toast.

My friend who ordered the breakfast bowl wasn't as pleased with his experience. While the flavours worked well individually, he felt that they didn't mix well together - it was like a deconstructed breakfast bowl. Everything was really big and chunky, and the eggs were a huge mass. However, he loved his iced coffee, which he ordered without whipped cream and deemed perfect. With a slight chocolatey flavour, it reminded him of a kid's drink from back in the day.

Overall verdict - good food - I'd return for the grits and pancakes alone! However, service is in definite need of improvement.
Posted by The Kenyan Nomad at 6:00 PM