What We Did in Wine Country (California): Part 3

Haven't checked out part 1 and part 2 yet? Make sure you do! 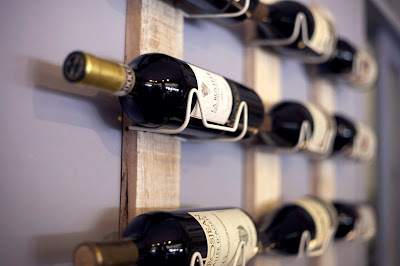 April 27, 2016
Happy Anniversary!! We went to town to look for an olive oil tasting, but absolutely nothing opened up till 10. We did go see the amazing Castlello di Amorosa and take pictures. We drove around and ended being the first group at Sterling. What a place! It is more of an experience than a tasting, and what a production. The tour starts with a Gondola ride up to the building on top overlooking all of the vineyards. It’s sort of a Disney effect. We got the extra tastings free with our hotel card and visited the art gallery with my favorite Chagall “Fox with Grapes”. It also included several original Ansell Adams, a Picasso and a Renoir among others. I can’t find our tasting list – but won’t give up! 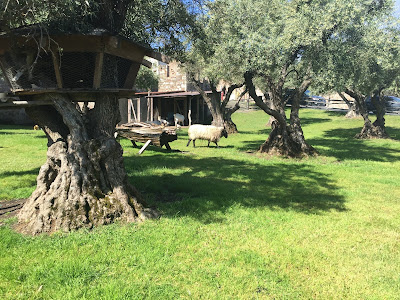 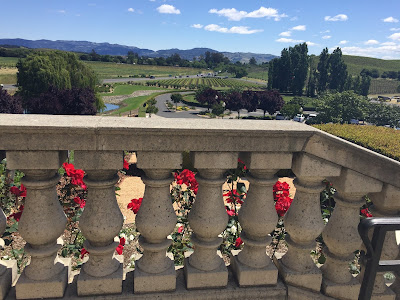 After Sterling, we went to Tra Vigne for a pizza lunch.

Our next stop was Rombauer- not really what we expected. The grounds were pretty, but unlike all of our other experiences, the employees weren’t very chatty or friendly. Fortunately, another couple was there from this area and were extremely knowledgeable and happy to give millions of suggestions. I did finally make the connection with Irma and Rombauer, who was the author of Joy of Cooking and aunt of Vineyard owner. 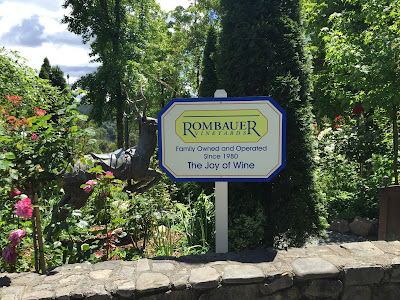 From there we went to Franks Family just because everyone seemed to be loving it. The guy pouring was friendly and informative. The wine was nice – but nothing special. We had a Chardonnay, Pinot Noir, Zinfandel and Cabernet Sauvignon (all 2013). We ended our day at Duckhorn, which was a beautiful spot. We sat on a long porch and thoroughly enjoyed the experience. We shared two tastings again so we wouldn’t overdo it! We had the 2013 Napa Sauvignon Blanc, 2012 Merlot, 2012 Napa Cabernet Sauvignon, and the Estate Merlot – Three Palms.

Dinner was at the Market right in the middle of town. I would have loved to explore the shops, but everything closes at 4 or 5. We brought our own wine and had no corking fee! We shared the lobster roll – nothing special- and the jalapeno cornbread - not very southern, more bread – but good. Tables all around us were eating fried chicken that looked disappointing. (They need to visit Nashville – but not stay!) I had grilled swordfish. Sammy ordered champagne battered fish and chips. Richard had their bacon and 3 cheese macaroni. We shared the famous butterscotch dessert. Too much food and wine, I went back to our B&B and went to sleep! Roy let me pick a lemon from his huge tree. Brought it back and will plant the seeds.

April 28, 2016
We enjoyed another breakfast at the Spanish Villa Inn and then packed to leave. Based on the advice of the couple we met yesterday, we drove Hwy 128 to Healdsburg; it was a stunningly gorgeous drive – worth the extra 45 minutes! The town was bigger than we thought with a pretty town square.

Our tour and tasting wasn’t until 1:30 at Schramsberg so we decided to try Wilson – highly recommended by Sylvia Ganier and the couple we met yesterday. The Wilson family owns several wineries that were recommended to us. Each member of the family has a different specialty. Tasting was an experience. Initially we were the only guests and our server was very entertaining. Wilson is a small vineyard that does mostly Zinfandels. I learned a lot - especially that I actually like the drier ones. We tasted standing at a small bar with a great view outside.

The Wilson Family has a great metal sculpture of a moving coyote in front. We sampled a 2012 Chardonnay (loved it), 2012 Ellie’s Petite Sirah – he explained the meaning and history of the word – 2013 Bramble Zinfandel, 2013 Nolan Zinfandel, 2013 Tori Zinfandel, 2013 Forchini Reserve (100 year old grapes) Victoria Johanna Zinfandel, plus a couple of special pours that weren’t on any menu! Loved the picture of the dogs owned by family members (we met Miss Molly later).

We grabbed lunch at Oakville and ate in the car as we travelled the road back to Schramsberg. That tour was wonderful. We went through the caves and saw what the production of sparkling wine really entails. Our guide was named Rimple! He loved cooking and shared a favorite recipe that goes well with the reserve – strawberries with ricotta, honey, balsamic, pepper and a bit of tarragon. He had pictures of many former presidents drinking the sparkling wine and a hilarious story about a young Barbara Walters mispronouncing on air Blanc du Blanc as Blankity Blank!!

Afterwards, we tried to check into our hotel (again)- Americas Best Value Inn was only moderately awful. We had dinner reservations at Willi’s Seafood and bar. It was a tapas menu and we shared lots of small plates plus a bottle of L Peterson Merlot. We had a spinach salad with dates, almonds and warm bacon dressing, sour dough bread with parsley garlic butter, a lobster roll (low point of meal), a fried fish sandwich, fried clams and shishito peppers and a seared tuna. Too full for dessert. Too tired!

April 29, 2016
Excited about a tour and tasting at Ferrari Carrano at 10:00 (free tour by reservation - very cool!) Breakfast- pastries and coffee at the Flying Goat, and off we went. Our tour guide was so informative – actually the best tour we had. The grounds were beautiful and the story behind the winery was so fascinating. The brass statue of a wild boar sits in the entrance and is kind of a symbol for the winery. We purchased a boar wine pourer/ cork stop. The tour lasted a little over an hour and then we enjoyed a tasting in the upstairs bar. You could pick 5 wines from a menu. I liked the Tre Terre Chardonnay 2013 Russian River Valley and the 2013 Lazy Day Pinot Noir from Anderson Valley. Richard really liked the Lazy Creek Gewürztraminer 2014 (I thought it would be really sweet but it wasn’t – good with spicy food).

Finally, what Richard had been waiting for: FRANCIS FORD COPPOLA! The winery is set up on a beautiful hill, but it is so different. People (California people are weird) pay huge amounts to swim in a large, okay looking public pool. We bought an average country club style salad lunch and watched them. It was something!

The inside had several movie sets including the chair and table from the Godfather and a car that was in a movie Tucker. They also had all of Francis Ford’s Academy Awards from Patton and both Godfather films on display. They did have tastings, but we just wanted to look at all the stuff. Richard bought a bottle of Director’s Reserve. It was time to finish our tastings with one last fun vineyard and we made a good choice by going to one of the Wilson Family Wineries, deLorimier.

It was very small but very pretty. We noticed that tastings in Healdsburg and around were much less expensive and more generous than in the St. Helena area. For $5 each we tasted 5 wines of our choice outside in a small garden. We met Miss Molly from yesterday's painting at Wilson Winery. There was a menu to pick from, and with some help from the staff we chose the 2013 Estate Chardonnay, Malbec Furlong 2012, 2013 Primitivo River Lane, 2013 Harris Kratka Reserve Zinfandel, and the 2013 Two Pear Zinfandel. It was a beautiful setting and we were thoroughly entertained by the bridal party and Pepper, the dog with a mullet.

I’m glad we saved Bravas Bar de Tapas for our last night’s dinner. We were seated outside in a courtyard dominated by a huge orange tree and a man making Paella over a large open fire. We shared Pan Tomate and Bacon wrapped dates with blue cheese and Marcona almonds. Next we had croquettes with creamy chicken ham and Gruyere and of course the marvelous Paella. What a production. The rice was browned and the seafood and sausage were perfect. We ended the meal with syrupy delicate rum balls sweet and a little salty and a sherry tasting. It was perfect.

Wonderful trip! I’m so glad we came in April for the weather and lack of crowds. I think we all agree it was one of the very best of our trips!!

What did you think of Sallie's adventures in wine country? We'd love to hear from you!

Thank you so much for this wonderful post dear. I am a big time wine fanatic and that is why I just love trying different types of wines. I am also going to plan a small party and wine tasting event at best event venue Chicago and I hope I will be able to plan it properly.